The story is not recent, but it still helps to illustrate the biggest question.

It was a sunny Wednesday morning in San Francisco, at the height of the summer of 1985. Kenneth Baldwin, 28, dressed in his work clothes, got in his blue pickup truck and began the 3-hour drive to the Golden Gate Bridge. He parked the car and strolled along the pedestrian walkway above the river. He stopped at the centre of the bridge. Waiting until he was completely alone and there were no boats on the river below he counted to 10. He lost his nerve. On the second count he lost his nerve again. Finally, the third time, he lept over the handrail.

The bridge is 225 feet above the river. Since it opened, almost 1,300 people have jumped from it. Only 26 survived. Kenneth Baldwin was one of them.

Looking back at the event, Kenneth says that the jump changed everything. Before the jump he says he was utterly self-absorbed – consumed by depression – feeling trapped in a life that seemed worthless. When he regained consciousness on the deck of the boat that rescued him, he says he felt an intense gratitude for life, which has never left him since. “I'm almost a completely different person now. I know now that I'm lucky to be alive. I may have had a crummy day at school [Ken is now a high school teacher], but I have my life.”

Another survivor describes a similar change of outlook: “It's beyond most people's comprehension. Now I appreciate the miracle of life - like watching a bird fly - everything is more meaningful. For the first time I experienced a feeling of unity with all things and with all people.”

These people are both unusual and very ordinary. It is not normal to be depressed and suicidal, but it is normal, in our culture, to live inside a narrow little box where the windows are papered over and on one of the walls is a huge screen showing brighter-than-life images of air-brushed models, and we watch them over and over again and lacerate ourselves. I remember reading an interview with a woman in her 40s on a diet. She was in tears realising that for decades she had put her life on hold, waiting until she was thin before expecting to enjoy being alive – a period of waiting in which her youth had come and gone – a period in which the miracle of life, if it had ever flickered, had been immediately snuffed out.

The really big question is how the myriad petty anxieties can fall away and people can really appreciate the miracle of life beyond the papered-over windows without having to jump from a great height.
Posted by Torn Halves at 11:30 No comments: Links to this post

No criticism of the Occupy Movement intended. Just highlighting the point that there will be no real change until we can occupy something a bit closer to home.

I was pouring milk on my Sugar Puffs at breakfast and had visions of the Honey Monster from those childhood cereal ads. Oh no! So I bang my forehead repeatedly against the kitchen cupboard. It works.

The Monster is gone. So I walk over to the table. To my horror the Scooby Do song starts playing in my head. Shit!

It's not so much that such a large part of my childhood was wasted in front of the telly, it's that I feel my mind has been stolen, or rather invaded, and the enemy has dug in and built elaborate military bases in every cerebral corner, and I can't see any prospect of kicking them out.

I recall the mountaineer Joe Simpson who fell and broke his leg in the Andes and had to drag himself down the mountain for days and only just survived. He described teetering on the brink of a freezing cold death, sliding in and out of consciousness, while hearing Boney M singing "Brown Girl In The Ring" over and over - and he had never even remotely liked Boney M.

That would have been no way to die.

This is no way to live.

Occupying the high street is easy. Occupying my mind is a bit tougher.

Posted by Torn Halves at 23:02 No comments: Links to this post 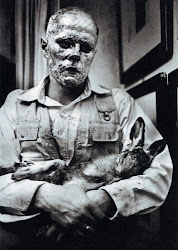